a fortress town and a gallery town in the open air, a must see of Cote d'-Azur 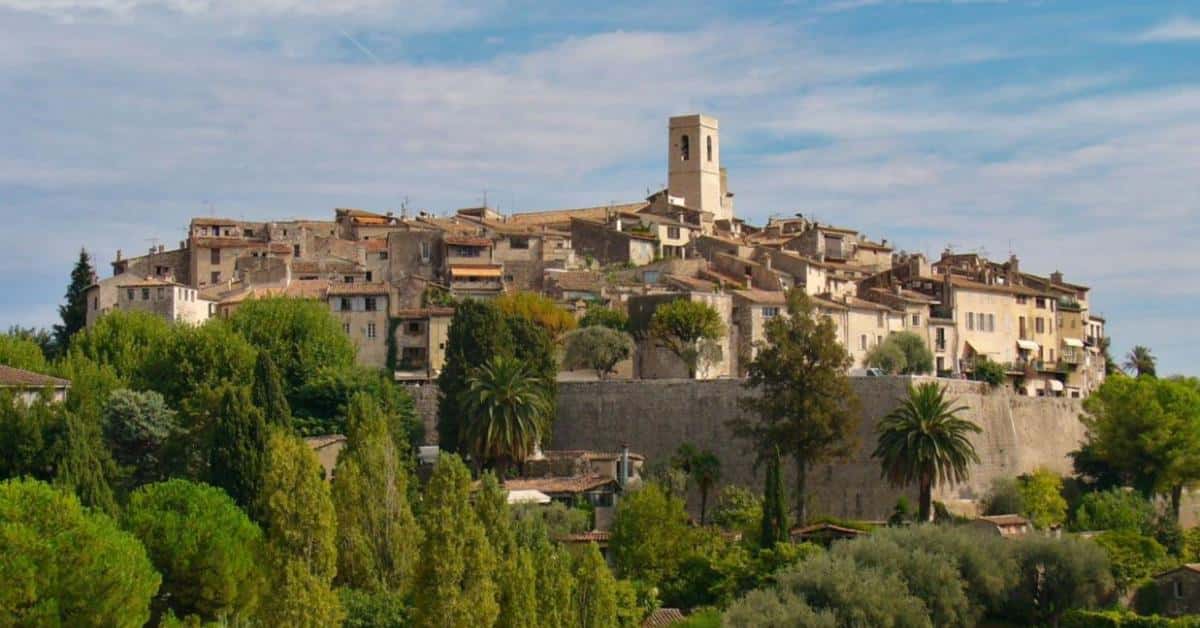 The town was founded in the eighth-eleventh centuries as a small fortress not far from the sea coast (about 8 kilometers), but its inhabitants were forced to relocate up to the mountains due to continuous raids of the Saracens.

Later in the 16th century, to be more exact in 1538, during the reign of King Francis I, Saint-Paul was encircled with a solid fortification wall and turned into a Southern outpost of the French Kingdom. It is remarkable that Saint-Paul’s defensive walls were among the first bastion-type fortifications in France built by French architects. Following Nice’s accession to France in 1860 it lost its strategic significance as a royal fortress and became a lovely location away from noise and hustle of the coast, a favorite place of rest and inspiration of Europe’s artistic elite. As legend has it, the fortification wall has survived to this day and adorns the town as its architectural landmark only because in the 19th century, amid a building boom, it was not dismantled as a source of construction materials due to the fact that the town fathers could not agree on sharing the revenues from its sale.

The church square (the highest point in the town’s historical part) hosts the main tower of the old fortress (citadel), a local history museum, a collegiate church and the Chapel of White Penitents (a unique symbol of Saint-Paul). The Citadel is the only surviving part of the 12th century castle. It was visited by Sébastien de Vauban, the military architect of Louis XIV, Francois I and Count of Provence Ramon Berenguer V. Since the 13th century to this day it has been used as the building of the town hall. Yves Montand and Simone Signoret were married here on 22 December 1951. Their bestmen were Jacques Prévert and Paul Roux. The toothed tower at the town entrance dates back to the 14th century. The town gates called Port-de-Vence were built in the 16th century.

Why has Saint-Paul become so popular?

Locals were not really amazed by an exceptional beauty and views of these places, but after Cote d'-Azur came to blossom as a resort in the 1920s, the town became frequented by painters like Pablo Picasso, Henri Matisse, Chaim Soutine, Georges Braque, Joan Miro, Paul Signac, Amedeo Modigliani, Maurice Utrillo, Pierre Bonnard, Fernand Leger and others, who arrived here in search for inspiration. Some of them were a little bit known at that time, others were not, but it was those artists who started shaping the history of Saint-Paul de Vence as a bohemian and sybaritic spot. Artists from Paris usually stayed at the hotel called La Colombe D’Or, painted landscapes of the surroundings, and then used them to pay for meals and lodging. The farsighted owner of the hotel named Paul Rouault did his best to give shelter to poor artists whose works appreciated greatly (with some of them priced incredibly high) in the course of several decades. Nowadays Rouault’s heirs own works by such painters as Picasso, Modigliani, Cocteau, Chagall, Bonnard and many others, while the hotel and La Colombe d'Or restaurant have become an iconic place.

Contemporary celebrities who have visited the town include Théo Tobiasse, Giuliano Mancini, Luc Trezens, Remy Pesca and Michel Folon. It has been praised by poets like Jacques Prevert, and Andre Verde.  World-renowned writers such as Simone de Beauvoir, Colette, André Gide, Jean-Paul Sartre, Paul Valery and many others lived there for a long time enjoying local hospitality and drawing inspiration from its pacifying atmosphere. It has also been visited by Brigitte Bardot and Catherine Deneuve. Marina Vlady mentions in her book “An Interrupted Flight” that she and Vladimir Vysotsky used to come to Saint-Paul de Vence for a walk.

Not far from the fortification walls of Saint-Paul’s historical center there is another sightseeing attraction for art lovers on top of a neighboring hill - Fondation Maeght Gallery.

Fondation Maeght is remarkable on its own. It is one of the most famous and beautiful small private museums of the world. A temple of the 20th century arts opened in 1964 by art dealer, collector and publisher Aime Maeght together with his wife Margaret half a kilometer off Saint-Paul de Vence in the shadows of pine trees with a magnificent view of the surrounding area. Fondation Maeght is distinguished from similar museums not only by its collection (one of the best collections of the 20th century works of art) and architecture designed by Josep Lluis Sert, but also the history of its creation. Up to 1946 Aime Maeght owned an art gallery in Cannes, but later, inspired by Matisse and Bonnard, moved to Paris, where he opened Parc Monceau Gallery exhibiting works by Braque, Chagall, Miro and Arp. But his Paris success was marred by a tragic event in the Maeght family, when his son Bernard died of cancer. Fondation Maeght became a kind of dedication to him. Miro introduced Maeght to Catalan architect Sert, who had designed a studio for the painter in Spain. Maeght wanted to create a modern functional museum would fit organically in a large Mediterranean garden. Fondation Maeght consists of two interconnected buildings of one and three stories. Due to a peculiar form of the roof some of the halls resemble a cathedral. Well-considered lighting was discussed with Braque, Chagall and Miro, whose works are displayed here. Next to the main building there is a small chapel, whose ruins were discovered in the course of construction.  Maeght decided to restore it. Its glass mosaic was created by Braque. The fresco "Lovers" on the outer wall of the building was painted by Marc Chagall, while stained-glass panels in St.-Bernard Chapel and the “Fish” mosaic tiles in the pool were made by Georges Braque.

Works by Joan Miro accompany visitors everywhere: in the patio you are met by the “Characters”, while in the inner garden you will see the “Miro Labyrinth” with 14 sculptures and ceramic implementations.

Some halls of the museum are devoted to Miro and Chagall, a steel fountain created by Berry is installed in the sculpture garden, the pool is decorated with mosaics by Braque, and the furniture in the small garden café of the museum was designed by Giacometti. Viewing platforms render a special touch to the sculpture park making it possible to enjoy the surrounding panorama and art.  The current collection includes over 20 works by Alberto Giacometti displayed in the garden and inside the building, and precious pieces by such 20th century artists as Bonnard, Braque, Matisse, Calder, Adami, Del Re, Chagall, Leger, Miro, Lindner, Ibert and others.

Chagall fell in love with French Cote d’Azur as early as during his first visits to the seaside following his final emigration to Europe. “Je remercie le destin de m’avoir conduit sur les bords de la Méditerrané” - “I thank luck for having brought me to the Mediterranean seaside”, he wrote.  After the war he frequented the south of France, lived for a long time in Vence and Nice, but in 1966 finally moved to Saint-Paul de Vence, where he built a villa not far from the town entrance.  There is a small paved path leading from the villa to Saint-Paul’s fortification walls used by Chagall almost daily to visit the town and enjoy the fabulous panorama of the fortress and the sea coast.  Wishing to depict a view he particularly liked, the clarity and transparence of the air, and the charming surrounding atmosphere, he would stop right on the path and stayed there for a long time painting … This is how a unique series of works that can probably be called “Saint-Paul Views” came into being. Make sure to visit this wonderful town and have a stroll along the streets trodden by Chagall in search for inspiration. Use one of them to go down to a small municipal cemetery hidden behind the trunks of impressively large plane trees.  This is the place where our compatriot, the great painter Marc Chagall found his final repose having lived in Saint-Paul for almost 20 years. His grave is surprisingly unpretentious with his birth and death dates engraved on a marble slab decorated with hardly visible angel wings – 1887-1985.  He died shortly before his centenary having preserved an incredible creative activity and zest for life till his last days. His second wedded wife, Valentina Brodsky, better known as Vava Chagall, rests next to him. It was her image flying over Saint-Paul that the painter captured on his canvasses. Or probably they depict his first love, Bella Chagall, who died so tragically and unexpectedly in 1944 in the US?  No one will ever know …